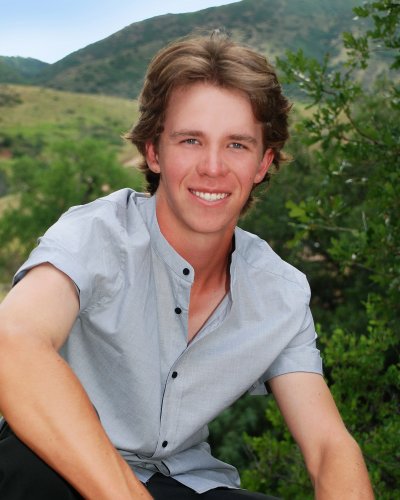 Bradley Blakemore is the 2022 recipient of the $1,000 Jamin B. Wilson Life-Long Learner Memorial Scholarship.  Bradley is unsure of his educational and career goals, but he IS certain that he would like to play baseball at the next level.  As a matter of fact, he is currently in discussion with several coaches in the area about the possibility of doing just that!  Bradley definitely made his mark at D’Evelyn in the baseball arena.  His career achievements included making All-State Honorable Mention and the All-conference first team.  He has no problem with the possibility of attending a junior college for 2-years and then transferring to a larger school, perhaps with a baseball scholarship (?), to complete his college education.  He does realize that, considering his success at D’Evelyn (defined as his May 21 graduation!), it would be a travesty to squander what he has learned over the last 4 years to help him obtain a college degree.  His Spanish II and III teacher could not agree more.  She described Bradley as “an enthusiastic and devoted young man whose resiliency and dedication will serve him well during his college career and beyond.  He has developed into an individual who understands the meaning and importance of hard work.”

In his scholarship essay, Bradley wrote about several affirmations that were posted on the Jamin Fund website following Jamin’s untimely death on December 14, 2006, while serving in the U.S. Air Force at Spangdahlem Air Force Base, Germany.  Bradley thought that Jamin’s joy for life stood out in many of these affirmations.  He wrote that Jamin obviously loved life and lived every day as if it were his last.  He quoted a contributor who stated that “Jamin was the consummate optimist, able to find silver linings in the profound and the ordinary.”  Bradley wrote that Jamin’s ability to deliver a level of joy to the people around him on a daily basis, regardless of whether he was in or out of uniform, is something he would like to aspire to in his life.  Another quote included by Bradley is one that he intends to emulate throughout his lifetime: “I never saw him without a smile on his face.  You could tell he enjoyed life and encouraged others to do the same.”

The best of luck to Bradley Blakemore, a young man who most certainly knows what he wants  to do next with his life, and most certainly has the tools to be successful.  May his reach exceed his grasp as he maintains the positive attitude he so accurately attributed to Jamin B. Wilson.