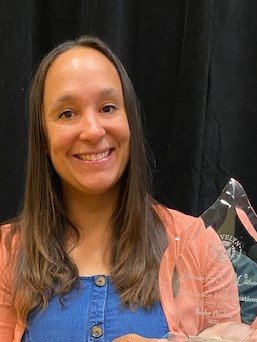 Becky Paschke, D’Evelyn’s Director of Instrumental Music, is the 2022 recipient of the $3,000 Jamin B. Wilson Excellence in Education Award.  She is well known for constantly looking for different, challenging ways her students can perform in major events. Four years ago, she set a goal for the D’Evelyn Marching Band to perform in the Presidential Inauguration Parade (Parade) but, with the onset of COVID-19, she thought her dream would have to wait 4 more years.  Despite COVID, she continued to investigate the application process for the Parade and secured a letter of recommendation from Colorado Senator Michael Bennet. Being the eternal optimist, she waited patiently to find out if the band would be selected to perform virtually for the entire country. Through her leadership, the band shined on the national stage on January 20, 2021, as one of only two high school bands in the entire United States to perform in the Parade!

Becky works tirelessly for the entire school, not just the marching band. She can be found at school at all hours helping students with Eagle Scout projects, the musical, winter percussion recitals, winter guard, orchestra performances, and concerts. She is a true example of a teacher that believes all students, not just an elite few, should be held to rigorous standards.

For each of the 6 years that Becky has been D’Evelyn’s Director of Instrumental Music, the D’Evelyn Orchestra has been awarded “The Best Orchestra in 2A (and 3A)” at the Colorado West Music Festival. The marching band also has an amazing history of success - winning 9 State Marching Band Championships out of the past 10 years, four of these championships with Becky at the helm!  Shortly after winning her third state championship (in her third year at D’Evelyn!), to the surprise of many, she announced to her students that she believed the Marching Band needed a new challenge.   Consequently, she discussed the idea of moving the Marching Band from Division 2A to the more competitive (larger schools) Division 3A.  She and the students discussed the pros and cons of such a dramatic move with the students ultimately voting to make the move - and promptly won the following year’s 3A State Marching Band Championship!

Congratulations to Becky Paschke for winning this year’s Excellence in Education Award as she continues to make a positive impact on her many students every day as D’Evelyn’s Director of Instrumental Music.  Ms. Paschke is certainly deserving of having her name added to the plaque containing the names of the previous 24 recipients since 2008 to win this prestigious award!