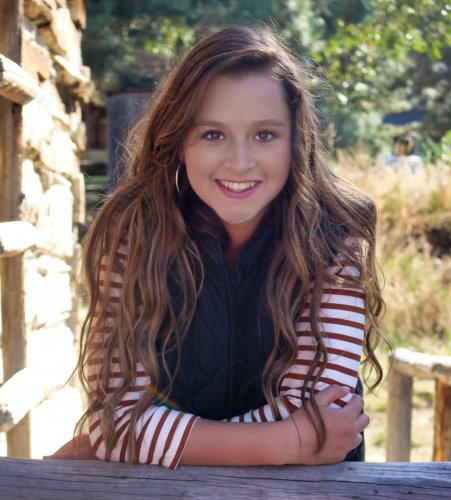 Graduating senior Jazlyn Jade Coronado was selected to receive this $1,000 scholarship by the D'Evelyn Education Foundation's Scholarship & Award Selection Committee. Jazlyn became the second winner of this scholarship that was awarded for the first time last year in honor of Jamin B. Wilson, a 1999 D'Evelyn graduate. In her scholarship application, Jazlyn described a life-long learner as one who 1) always strives to do better in all aspects of life, 2) is motivated to learn new ways and new techniques to foster self growth, 3) inspires and lends a hand to others, and perhaps the most important, 4) constantly learns from life experiences and is mature enough to adjust his/her life accordingly!

An unusual requirement of this scholarship application is to review the affirmations that were sent to Jamin's family following his untimely death on Dec 14, 2006, while serving as an Air Force 1LT in Germany (see JaminFund.org/Jamin's Life). Applicants were then required to select one or more of the most significant, heartwarming, or memorable affirmations and briefly explain how it/they could positively affect their future. Jazlyn was indeed touched by many of the kind words that described the young man known as JB to his friends, high school and college faculty, co-workers, and Air Force officers and enlisted personnel. The affirmation that stood out to Jazlyn was the following: ". . . he stepped in the door full of ideas and enthusiasm, willing to lead and eager to learn from other people's experiences. Ever an optimist, he wore that infectious smile as if it were part of his uniform." Jazlyn wrote that as she embarks on a new chapter in life, her heart has been moved to continue to be optimistic, and never hesitate to learn from others since such experiences can often mold and shape you into the person you will ultimately become. She admitted to being inspired by the knowledge she had learned from Jamin's life and "will strive to be like the person Jamin was and also 'wear an infectious smile as if it were part of MY uniform'."

Jazlyn's closing sentence of her application said, in part, that even if she did not receive this scholarship, she was extremely grateful to the D'Evelyn Education Foundation and for "the opportunity to learn about Jamin's life and the effect he had on me and all the people who knew him." Sincere congratulations to this outstanding young woman who will attend Colorado State University in the fall to pursue her dream of earning a Master's Degree in Social Work. Jamin would most certainly approve of her selection to receive his Life-Long Learner Memorial Scholarship!!!