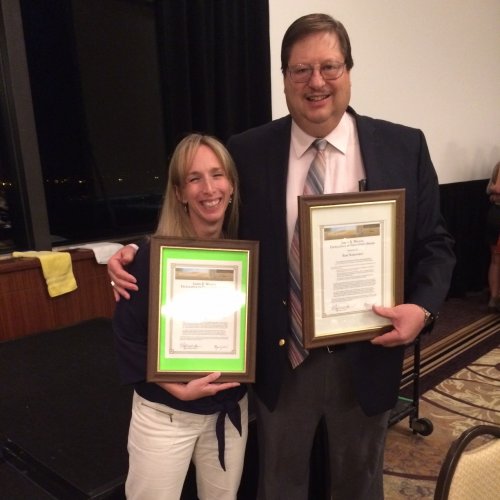 As always, the Senior Banquet was a big success, and this years Jamin B. Wilson Excellence in Education awardees were thrilled. Deb Holland and Rob Northway each received a check for $2,500 from the Jamin Fund.

Deb began teaching at D'Evelyn in 1997, just 3 years after the school opened, and was the girls swim coach during her first 6 years. Since arriving at D'Evelyn, she has taught 7th and 8th grade Geography and U.S. History and 9th and 10th grade Social Studies. She began teaching AP Psychology 4 years ago and will continue teaching that class next year along with 9th Grade Social Studies. Deb's educational credentials include a BA from Indiana University and a MA from CU. She and husband Greg have three children, the oldest an 8th grader at D'Evelyn next year.

Rob has been at D'Evelyn since 1995, making 2016-17 his 22nd consecutive year as the school's Junior High Counselor. He previously spent 9 years as a 4th grade teacher. Each year Mr. Northway asks his 200 new 7th graders who they believe he works for at D'Evelyn. He surprises the vast majority of them when he responds by saying that he works for each one of them, along with each of the 185+ 8th graders, and all the 7th and 8th grade parents. This unique perspective is fitting for the person who has often been described as an unsung D'Evelyn hero.